Welcome to our August edition of VR Source Monthly, an overview of the biggest VR technology news and reviews from the previous month. As our regulars may be aware, in addition to rounding up all the best news, we also tie in the monthly recap with a great giveaway.

I hope you enjoy some of our favorite news and announcements from July 2016, and when you get through reading, be sure to sign up for your chance to win an AMD RX 480 graphics card and a $100 Steam gift card!

Probably one of the most exciting things that happened during the month of July was the Sony Holiday Showcase in New York City. During that time, we had the opportunity to check out Batman Arkham VR, RIGS Mechanized Combat League, Robinson: the Journey, and The London Heist. While a number of these games were also demonstrated at E3 2016, our schedule was so packed, we missed several of them, so it was nice to have a second chance to go hands on. 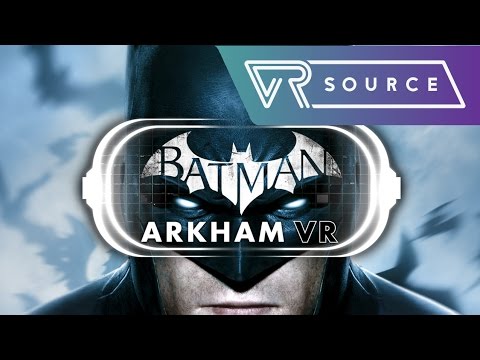 Easily one of the biggest franchises in modern gaming, we learned the Batman Arkham series is heading to the Playstation VR back at E3 2016. At Sony’s recent holiday showcase, we were able to finally go hands-on with it, and it certainly left us excited about the future of this AAA VR game. From what we’ve heard about the game, this VR title will focus less on combat and more on the detective side of the dark knight, though we imagine combat will certainly play at least some role here. Either way, we’re looking forward to this game when it arrives to the Playstation VR. 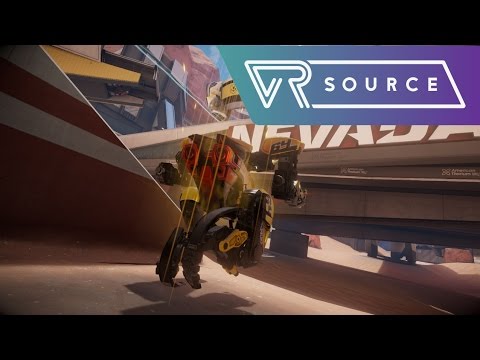 RIGS is a unique mix of mech warrior meets sports, taking sort of a basketball-esque approach but adding in weapons and combat. It’s certainly a unique title, though the frantic pace of the game might make it a poorer choice for those that find themselves a bit more susceptible to motion sickness. Overall, this one probably isn’t for everyone, but if you like the idea of sports with a humorous futuristic twist, it could be right up your alley.

Robinson: the Journey hands on 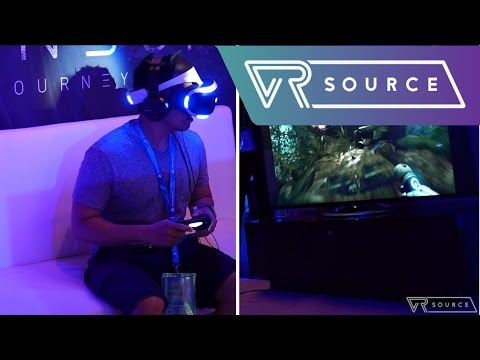 Robinson: The Journey is an adventure-exploration game that tells the story of a young boy who crash lands on a strange world inhabited by dinosaurs. If that doesn’t have you intrigued, then we don’t know what will. For those of us that grew up in the Jurassic Park heyday era (aka the 90s), the dream of walking beside a dinosaur is one that will likely never die, and so the idea of living this dream in VR is an appealing one. Crytek is known for great games and has shown that it is highly invested in pushing VR forward, so this is a title that is worth looking out for, though unfortunately no launch specifics have been revealed just yet.

The London Heist hands on 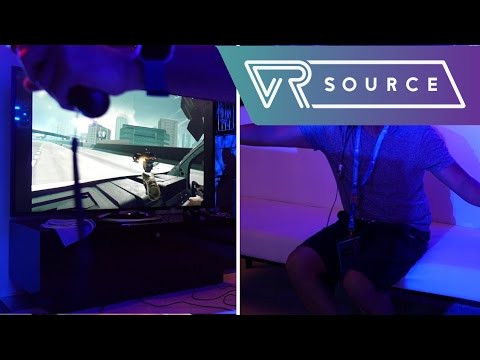 The London Heist is a first person action shooter that places you in the roll of a member that’s part of a robbery crew. In the demo we were able to take part in a getaway scene. In the demo we are in the passenger’s side of a vehicle and soon fin ourselves having to fight our way out. This non-stop action gives you just a small taste of what to expect when this game eventually arrives for the PSVR. 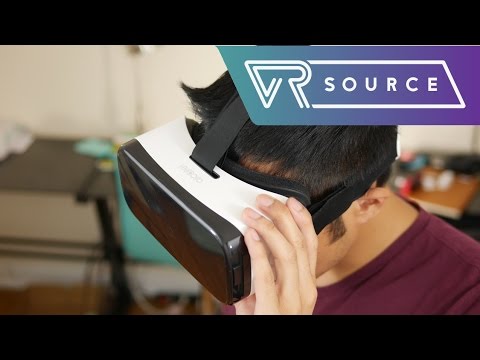 The HTC Vive, Oculus Rift, and Playstation VR remain the best ways to jump into the world of VR, but there are a number of mobile-based solutions that are considerably cheaper and while they don’t give the full experience you’d get with a more expensive headset — it’s a nice taste of what’s to come. One such mobile VR headset is the new Alcatel VR. Included free with the upcoming Alcatel Idol 4s, the Alcatel VR is in many ways nothing more than a sturdier, plastic-clad “Google Cardboard” viewer, though it does have a few extras that help set it apart. Check out our full review for more details on what to expect. During the month of July Halfbrick studios released Fruit Ninja VR for the HTC Vive, translating the mobile experience over to the realm of VR. Is there enough new here to make this a worthwhile VR experience? That’s exactly what we explore in the full written review. What we can say is that if you love Fruit Ninja, you’ll be pretty pleased with this new VR version.

Hands on with Dolphin VR, a Gamecube/Wii emulator for Rift and Vive While the amount of content built exclusively with VR in mind is starting to expand greatly, if you’re looking to up what your headset can do, there are plenty of ways to run non-VR content in full VR glory. Previously we’ve talked about special software that lets you run some of your favorite ‘traditional’ PC games in 360 VR, but last month we finally went hands on with Dolphin VR — an emulator that lets you play Gamecube and Wii games in virtual reality.

Read more: Nintendo Gamecube/Wii games in VR work, but with some glitches (hands on) At VR Source we’re constantly creating new lists of all the best content from best Vive games to Rift games, best VR cameras, best VR-ready laptops, and so forth. We also pride ourselves in keeping them up to date. During the month of July we saw a number of new lists, as well as a pretty big update to our upcoming Playstation VR games lists. You can check them out below: During the month of July we also saw the release of a number of notable games:

We want to start by congratulating the winner of our previous giveaway for the Samsung Gear 360, Monika K. (USA). This month we’re giving away the AMD RX 480 graphics card to one lucky winner. For those that don’t know, the RX 480 is a new affordable VR-optimized graphics card that just happens to be fully compatible with the Oculus Rift and HTC Vive. If you were thinking about upgrading your PC to jump into the realm of VR, this could be a great way to do it. For those wondering, this isn’t the base RX 480 either, it’s the even better model with 8GB RAM.

Further sweetening the deal, a $100 Steam gift card will given away alongside the graphics card. That means you can upgrade you game with the RX 480 and get a few name games to better put your new card to work. You can learn more about the RX 480 here.