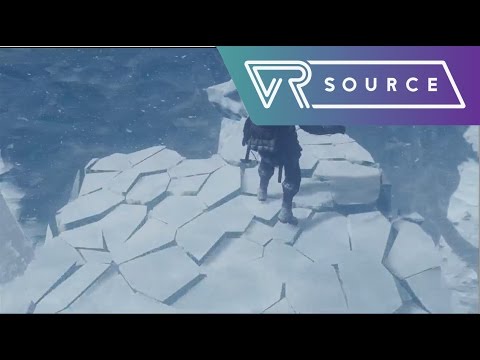 Edge of Nowhere is a fun game, but our biggest complaint is that it’s incredibly short.

When it comes to thrills, horror games have the pedigree to get the job done. Insomniac Games’ first title for the Oculus Rift does exactly that! This third-person action-horror game brings the genre to VR, all while delivering an immersive storyline and psychological roller coaster ride that’ll keep you second guessing about what’s happening to your character.

Blending action scenes with survival tactics, Edge of Nowhere is one of the most highly anticipated exclusive titles for the Oculus Rift, which is still in short supply of some original games. Having the VR element in place, it’s sure to keep players engrossed in this psychological thriller. Now, what makes this game so great is its story-telling; it’s probably the best thing about the game. The story has us taking control of our main character, Victor Howard, who crash lands in Antarctica to find his fiancé, who is part of this expedition. In his search, Victor ends up realizing things aren’t quite right at the camp where the folks on the expedition were last located. And that’s when things start to go crazy! First of all, apparitions of people he knows begin to mess with his head as he uncovers the camp. After exploring the surrounding areas, we ultimately find ourselves confronting this alien race that’s behind the bloody scene at the camp.

Without spoiling all of the story, the game relies on a lot of flashbacks to fill us in about Victor’s relationship with his fiancé – and why exactly they are on this expedition to Antarctica in the first place. These flashbacks break up the action sequences, while also filling in the gaps about what happened in the camp and why these aliens are here. This alien race, strangely enough, seems to have a way of affecting the mind, which ultimately leads our character to question his reality.

Quite frankly, the story reminds us of a mix between John Carpenter’s The Thing and The Shining, mainly due to how it takes place in the frigid tundra. This isolation of sorts, much like what occurs in The Shining, has a way of chipping away at the mind – causing Victor to question what’s real and what’s not. All in all, the engrossing story manages to keep us riveted throughout our time playing the game – so it’s undeniably our most favorite aspect! During the initial scenes, the third person perspective felt a bit jarring. We suppose that’s just the way our eyes get adjusted to the movement. Lateral movement, in particular, seems to cause more of an adverse reaction, making us to feel a bit queasy during our initiation to the gameplay, but we have to say that it went away quickly. And that’s a good thing!

Controlling our character is similar to any other third person game out there, since the perspective is fixed right behind our character. The VR experience is weak in my opinion, which is a shame, since it really doesn’t have much of an impact to how we interact in the game. In some scenes, we switch to a first person perspective, but aside from that, there’s nothing much to it. After playing through another Oculus Rift game, Chronos, Edge of Nowhere just goes with the cookie-cutter third person action-adventure approach. One annoyance that we have is how it’s almost impossible to move backwards, especially when you’re being overrun by monsters chasing you. Because of how the camera remains fixed behind our character, it never swings around to the other side when we’re trying to run backwards – so you end up colliding with something that gets in your way, or you end up dying.

Besides that, we do enjoy some of the action, which reminds us of some of the elaborate scenes in games like Uncharted. The ice cracks beneath you, and the next thing you know, you’re sliding and then being hurled towards an ice wall. Being in VR, things get pretty intense during some of the scenes. You’ll get those moments when you’re scared straight by those sudden surprises as something comes out of nowhere, always keeping you on your toes in what’s about to happen next. And it frequently happens, which isn’t too uncommon for an action-horror title.

The monster, or aliens in this case, vary throughout the game. Most of the time, you can use your melee weapon to dispose of the weaker ones, but others require stealth, and rock throwing. Yes, you read that right. Sure, you can use your rifle to blast them away, but ammo is in short supply, so throwing rocks to distract enemies is something that happens frequently.

Boss battles are shockingly simple, since they rotate their attacks – so once you’re able to establish the pattern, they’re quickly disposed. And that’s the thing about the game! First of all, there isn’t a variety with the enemies and weapons. And secondly, it’s an easy game to beat. In fact, we managed to finish it in under 5 hours. The visuals are pretty good, given the limited selection of top tiered titles that are out for the Rift. Great use of shadows give the game that eerie feeling, making you always wanting to proceed with caution into the next area, so you’re not scared out of your wits. Most of the game happens in the frigid tundra, so you’re going to see a whole lot of white in the game – and penguins. In some of the flashback scenes, which transport you to the jungle and port areas of a city, the game does a pretty nice job of replicating them to fit the mood of the game. Edge of Nowhere is a fun game, but our biggest complaint is that it’s incredibly short. Most casual gamers won’t have to invest days in beating this title. Plus, it doesn’t have a whole lot of variety with weapons and enemies. You’ll only find two kinds of long ranged weapons, your pick ax to use as your melee weapon and traverse vast ice caverns, and rocks to throw at the environment to get monsters to react and investigate. As for the VR element, the Oculus Rift isn’t really being utilized to its full potential. It’s very much in the same vein as your typical third-person action game. Indeed, you have freedom in looking around the environment, but that’s about it. Chronos has a similar premise with its VR experience, but goes a bit beyond what we have here with Edge of Nowhere because it’s integral to look around in VR to scope what’s lurking around the corner – giving us a plan of action to defeat enemies. With Edge of Nowhere, though, it’s just your ordinary third-person experience.

Most exclusive titles for the Oculus Rift are priced at $60, so the $40 cost for Edge of Nowhere seems forgiving enough to check out. The storyline, intense action sequences, and gorgeous graphics all propel Edge of Nowhere to be a good game worth checking out. For a VR-centric game, however, it doesn’t quite have that unique interaction to make you believe that it was specifically developed for VR in the first place.