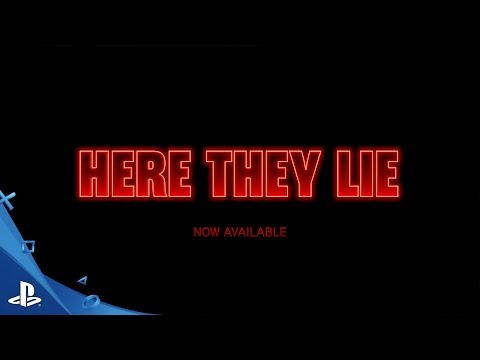 We first reported on Here They Lie back in March, when E3 was in full swing. We were absolutely astounded by the trailer the team showed off there, as it was one of the first true horror titles we saw on Sony’s new console-based VR headset. While we were left begging for more, the only sort of “release date” the team could tell us was at the time was “later this Fall”.

Well Fall is officially here, and the team has kept their promise. In an announcement made on the official Playstation blog, Tangentlemen’s Co-creative director announced that the game will be made officially available on October 13th. This is the same day which the Playstation VR console launches itself, and should be a premier title for those looking for the ultimate horror experience.

The blog post included the previous information, alongside a story of sorts which sets the mood for the upcoming game.

The line between reality and madness is wearing thin. There’s soot in my mouth. Singes on the tips of my fingers. Lungs all black and choked with ash.

He’s just out of the corner of my eye. Or is that my shadow? The longer I go without sleep, the closer he gets to me. Almost like I could make him go away if I would only let him in. A little closer. Just a bit?

Find me a sigil or a rusty piece of sheet metal. Nail it to my body. Anything to hold himback.

The walls have cracks and the foundations are slipping. I can hear the bones rattling on the masks. They are watching me with their filthy, mud-plastered eyes. They are watching all of us. I don’t look the same in the mirror anymore. None of us do. She must know more than she lets on. I can still see her yellow dress through the fog. It looks almost peaceful.

Dana, are you there?

Check out the new trailer above.

Are you excited for the title? I know we are.