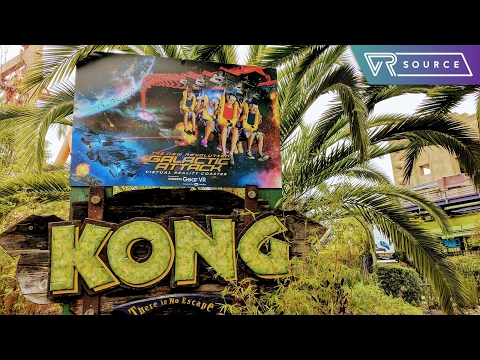 We’ve all seen those 4D movie theaters that jostle your seat around to induce a feeling of movement while watching a film, but it’s often hard for them to really suck you into the experience. Since your vision is not completely enveloped in the film, it’s natural for your eyes to pick up on things happening on the sides of the room, making it hard to forget that reality exists. That’s why Samsung teamed up with Six Flags to produce the Samsung Galactic Attack Experience, which uses a full blown roller coaster paired with a Samsung Gear VR headset to attempt to bridge the gap between the physical and virtual world.

Samsung Gear VR – everything you need to know

We recently checked out the experience for ourselves, and while there were some things we liked, we left with a less than perfect taste, while craving a more robust and high quality ride. The fact that you are dangling from a seat does a very good job of relieving your body of the physical feelings induced by real life, but the quality of the actual application left a lot to be desired.

The ride uses a Samsung Galaxy S7 paired with a Samsung Gear VR headset to simulate flying through space at blistering speeds. This was a very cool concept in its essence, but personally I don’t think the technology has been developed enough to the point that it can be used fluidly on a ride like this. There were multiple times throughout the experience where the frame rate on the game dropped significantly, and this paired with the pressure applied to my body caused the locomotion feeling that so many virtual reality developers try so hard to avoid.

While the experience was definitely entertaining, I’d like to see a lot more refinement done before this starts becoming a mainstream attraction at theme parks. The combination of AR and VR elements in the ride was implemented well and was quite interesting, but the latency, frame rate drops, and general graphics settings were low enough to the point where I didn’t feel like it was ready for the mainstream.

If you want to go experience the ride for yourself, you can do so at Six Flags Discovery Kingdom in Vallejo California. There will be 3 more experiences Samsung will be showing off on the same coaster throughout the year, so you can always go back to try something new at the turn of each season.