Hardcore gamers are divided mainly by two camps, consoles and PCs, wherein depending on their preference, they might favor one greatly over the other. Console gamers know that when they invest in a particular console, it means that they’re expecting longevity in knowing they’ll get several years of support and gameplay before having to succumb to buying a new console. Conversely, however, PC gamers are tied to the aggressive advances in technology, which often requires them to upgrade components in order to get the best performance – so shelling out the money to purchase new hardware is something they’re acquainted with doing.

Strangely enough, consoles are now being subjected to this kind of strategy. Sure, it’s not uncommon nowadays to expect a “mini” or “slim” variant of an existing console to be released after a couple of years, but now we’re entering this PC-like era with today’s consoles. Sony has taken the plunge with its latest effort in the PlayStation 4 Pro, a redesigned and upgraded model that’s undoubtedly driving performance to a higher level. This is fine and dandy for gaming as a whole, but this review is going to focus strictly on the virtual reality experience with the PlayStation VR.

While we’d love to go into detail about every single thing the PS4 Pro improves over the original console, like its support for 4K output with HDR among other things, we’re going to instead see if there are any meaningful differences with the PS VR’s performance. We’ve seen how Sony slimmed things down already with the PS4 Slim, but given how the PS4 Pro is an upgraded model with newer components, it makes sense that it’s slightly larger in size than the original model. Luckily it’s not a substantial amount of heft, as it’s a smidgen more spaced out than the original model – occupying a little more space on your entertainment center. And it doesn’t deviate from the angular, industrial-esque design, which now features a three-level tiered cut out on its façade, as opposed to the two-level one used by the original. The other new changes to the PS4 Pro’s design includes three USB 3.1 ports, where one of them is placed in the rear of the console to attach the PS VR’s processing unit in a more discrete way, as well as a newer HDMI 2.0 port for output at 4K resolutions. Aesthetically, the only noticeable difference in the design is its slightly spaced out size, which is warranted and all given the upgraded firepower that’s stuffed inside. 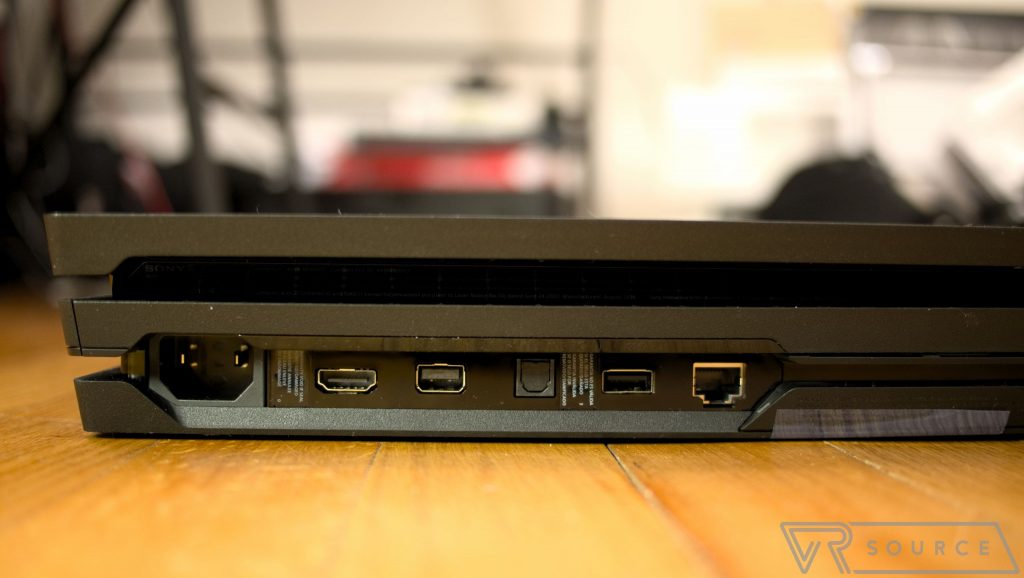 Even though we’re accepting of the minor design changes, we’re a little irked about how the designers did not take into consideration the PS VR. For one, it would’ve been nice if the PS VR’s processing unit were somehow integrated into the console natively – rather than continuing to be an attachment, which makes for a jungle of wires going in-and-out of the console. Heck, we would’ve been happy with a slot of some kind where the processing unit could’ve been snugly hidden away. Unfortunately, it’s still an eyesore. Having set up the PS VR already with the original PS4, there’s not a whole lot different here with the PS4 Pro – so the initial setup time is minimized to just connecting the PS Camera and processing unit to the console. As a precaution, we highly recommend doing the re-calibration process with the PS VR, just to ensure that the tracking performance will be at its optimal with the PS4 Pro.

As we mentioned earlier on already, the addition of a third USB 3.1 port on the back of the PS4 Pro helps to mitigate the jumbled and messy look of all the cables snaking in and out of the new console when the PS VR’s processing unit is attached.

All in all, without taking into account the software update that the PS4 Pro required to download and install shortly after getting everything up and running, the whole process took less than 15 minutes from start to finish. What’s new with the PS4 Pro?

Before we get down and dirty with the PS4 Pro’s performance with the PS VR, we’re going to briefly graze over what’s new, and its advantages over the original console. The biggest change, without question, has to be its support for 4K with High Dynamic Range (HDR). Essentially what this means now until games are natively developed in 4K, is that existing games will be rendered and up-scaled to 4K resolution – while offering greater color depth and contrast thanks to HDR support. However, that’s going to mainly hinge on your TV, as you’ll need to connect to a supported 4K HDR TV in order to take advantage of this.

A quick reminder, however, is that the PS4 Pro doesn’t feature an Ultra HD Blu-ray drive, so if you currently own movies on that format, the PS4 Pro won’t be able to read them. Despite that, there’s consolation in the fact that the PS4 Pro is essentially a 4K capable streaming box. Therefore, it means that you can binge on 4K content on Netflix using the PS4 Pro (connected to a 4K TV, of course).

When it comes to the processing and graphics power of the PS4 Pro, it indeed gets an ample upgrade. Internally, it leverages the same AMD Jaguar x86 octa-core CPU as the original PS4, but it’s running at a higher clock speed of 2.1GHz – as opposed to the original’s clock speed of 1.6GHz. Add to that, the PS4 Pro’s GPU, an AMD Polaris chip, can churn out a staggering 4.2 TFLOP with an increased clock speed of 911MHz. All of this enables the PS4 Pro to run some newer, more recent titles at an improved resolution and overall frame rate performance. Sony has been rather coy about the specifics regarding improvements, if there are any at all, with the PS VR running on the PS4 Pro. It remains unknown if there are any, but given the performance boost that the PS4 Pro taps into with its newer hardware, it’s a safe assertion that the PS VR would natively benefit from all of it. So, does it really have a viable improvement over the standard PS4?

First and foremost, there’s no improvement to the resolution, seeing that the display in the headset is still 1080p. That’s not going to change at all, unless Sony comes out with an upgraded model anytime soon for the PS VR, so to that degree, the same graphical visuals are still present here that we’ve seen already. Yes, you’ll still see some jagginess with straight lines, just because a display with 1080p resolution only inches away from your eyes, will certainly be more prone and apt to that.

As we know, frame rates have a lot to do in impacting the overall experience. Anything below 60 frames per second, or just choppiness/inconsistencies with the performance, can become problematic in the VR world. Those prone to motion sickness are apt to suddenly feel nauseous after playing for a short time, often requiring several minutes afterwards to recuperate. Considering the performance boost of the PS4 Pro, it’s only logical to presume that the PS VR experience would benefit from it – in some way, at the very least. After playing through some of the games we’ve already checked out, we will say that motion sickness isn’t as much of a concern here with the PS4 Pro. In fact, it seems to be less problematic. Games that are motion intensive, such as RIGS Mechanized Combat League, which made us sick after one session lasting under 10 minutes, didn’t make us feel sick at all here with the PS4 Pro. That’s surprising in so many ways, even more when it’s almost hard to discern the game’s frame rate through the headset. We felt that the frame rate was smooth and consistent with the original PS4, but rather, it was all of the action, movement, and the tracking of enemies that seemed to be the culprit in making us sick.

Other games where we felt sick after some play didn’t seem to faze us at all here with the PS4 Pro, so in a way, we can safely say that the PS VR experience here is improved – despite the lack of any noticeable difference in terms of the frame rate. The tracking, too, seems to be no different from what we’ve experienced using the standard PS4.

All of this begs the question of whether or not the frame rates are really improved with the PS VR’s performance using the PS4 Pro. Like we mentioned, it’s almost impossible to tell if they are, but given how we’re not feeling queasy playing the same games that got us sick beforehand, it leads us to believe there might be a combination of things behind the scenes contributing to the better experience. Without a doubt, we appreciate the end result, since getting sick is never fun! Ultimately, the tracks all lead us to the PS4 Pro’s price point, the defining area that’ll prove whether it’s a buy or not. Right now, you can find various bundles for the original PS4 for around the $250 – $300 range, which comes with some other goodies in addition to just the console itself. That means having to shell out another $150 or to pick up the PS4 Pro at its price of $400, a hefty investment that comes with some added benefits in the process.

However, if we’re to look at it strictly from the VR side, the only main advantage going with it is that we’re not getting sick playing through some of the PS VR’s intensive games. Obviously, the visuals don’t get any boost through the headset, as it’s still the same 1080p visuals we’re greeted with. While the frame rate performance here with the PS4 Pro doesn’t necessarily appear to be any better or improved over the standard PS4, the end result regardless is that we’re not getting sick – and that’s a good thing!

Skeptics will be reluctant to shell out the extra $150 for the upgraded model, but when immersiveness is integral in bringing virtual reality to life, without having to worry about getting sick in the process, it’s definitely something worth musing about. Best of all, it still comes with all the upgrades we’ve mentioned on early in the review – such as 4K output and its overall improved graphics processing performance. If you haven’t dove into the PS VR yet and currently deciding between the two systems, then you’re better off just forking over the extra cash in getting the PS4 Pro. Granted it’s going to be more out of your pocket, but it means you’ll be able to be experience VR much longer without the downtime caused by motion sickness.